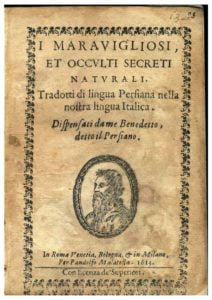 So-called ‘books of secrets’ were compilations of recipes and instructions for a vast range of processes, from forging iron to bleaching hair and curing syphilis to pickling quince. They brought information that had formerly been recorded in Latin, Greek or other languages (or not written down at all) to a wider public by printing it in the vulgate. Some of the books were quite large compendiums, whilst others were small, short and inexpensive booklets sold by peddlers and charlatans. The latter are of the greatest interest to the Refashioning the Renaissance project, as they would have been affordable to artisans and easy to obtain.

These works gave instructions on improving one’s appearance through recipes for skin treatments, hair-colouring and cosmetics but also offered instructions on dying thread and fabrics and removing stains. In this way, they could help people keep their textiles looking fresh, in good condition, and perhaps more stylish. Books of secrets also sometimes provided instructions for assessing the quality of rare and costly materials, such as lapis lazuli, or for making fake versions of things like pearls and rubies for yourself. This could make materials accessible to non-elite people, and make them more knowledgeable consumers. These kinds of recipes – for dyes, stain removers and making fake pearls – will be the basis for some of the experiments we conduct in the experimental phase of the project. Stay tuned for our results!