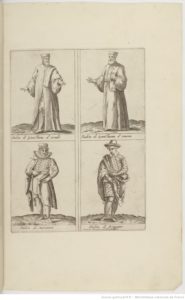 Costume books are collections of images that show the dress of various people from different parts of the world, with the earliest printed examples dating to the mid-sixteenth-century. Some of the books focus on just one city, such as Giacomo Franco’s Habiti d’huomeni et donne venetiane, which he first published in Venice in 1610, while others include figures from particular nations or regions, such as Nicolas de Nicolay’s Les quatre premiers livres des navigations et peregrinations orientales (Guillaume Rouillé: Lyon, 1568), and others still included examples of people from all over the known world, such as Cesare Vecellio’s Habiti antichi, et moderni di tutto il mondo(Giovanni Bernardo Sessa: Venice, 1598). Some of the books feature just images with short titles to let the reader know the social status of the person represented and the city or region from which they come, while others include more detailed commentary. 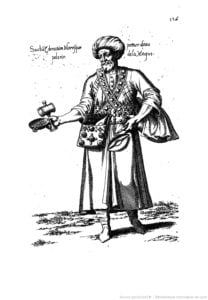 These books tend to focus on the dress of the elite, though many also include representations of peasants, artisans and other non-elite people, which are of great interest to the Refashioning the Renaissance project. Many of the books show or even explain the clothing in great detail, giving plentiful information about what one might expect an artisan from Venice to wear, for example. However, as with any image, we must approach these representations with caution; few of the images were taken from life, and many of the figures were copied and repeated over decades between different books, so rarely show the most up-to-date information. These books may also have been intended for use by artists as quick reference model-books, and perhaps show stereotypes or stock figures that were recognizable to contemporary viewers as such, rather than as a reflection of reality. Indeed, there is even some overlap between costume books and other kinds of pattern books – particularly for embroidery and lace-making: Cesare Vecellio, for instance, published both types of books!

Anna Buruma, `What Incredible Delight Is Taken in Beholding the Diversities of People’ : The Costumebooks of Abraham de Bruyn, 1995; Giulia Calvi, “Cultures of Space: Costume Books, Maps, and Clothing between Europe and Japan (Sixteenth through Nineteenth Centuries),” I Tatti Studies in the Italian Renaissance20, no. 2 (September 2017): 331–63, https://doi.org/10.1086/693982.