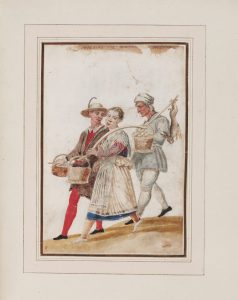 Friendship books, or alba amicorum, were books that were first used by students from Northern Europe in the early sixteenth century to commemorate the cities they visited and people they encountered during their education. Early on, the books were all prepared by hand; a small illustration would be commissioned from a local artist or workshop and inserted into the book (when the owner returned home) alongside a friend or acquaintance’s signature and a passage of text. The images were often portraits and/or the coats of arms of the signee, but also often included male and female figures in their local dress. Typically, the people represented are noblemen and -women, but there are many instances of lower-class figures, too, especially peasants, which are of particular interest to the Refashioning the Renaissance project. Owners of these books were particularly interested in the people at inhabited the countryside surrounding Venice.

The images were commissioned from artists local to the regions or cities represented, and therefore may present more accurate and up-to-date depictions of the costumes worn by different inhabitants. This may be especially true in comparison with images from printed books intended for use as alba amicorum, such as Philipp Lonicer’s Insignia sacrae (Frankfurt am Main: Georg I Rab, Sigmund Feyerabend, 1579), where there was no opportunity to update or change the figures’ dress.

There are many similarities between the figures found in alba amicorum and those in costume books and even printed representations of street sellers; together, these sources present us various perspectives on people and their dress, and are part of a growing contemporary interest in the world and its various inhabitants and a desire to document it. 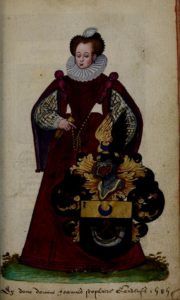 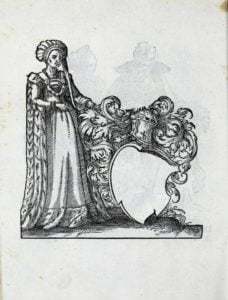 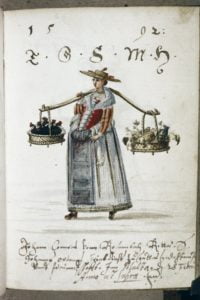 Image 2: Female figure next to a coat of arms, from the album amicorum of Jean le Clercq. This books combines print and manuscript: extra pages were inserted into La Métamorphose d’Ovide, Figurée (A Lyon : Par Ian de Tovrnes, 1564), where portraits, coats of arms and figures were painted. Image courtesy of The Getty Research Institute via Archive.org.

Image 3: Female figure next to a blank coat of arms that could be personalised by the signee, from Philipp Lonicer’s Insignia sacrae (Frankfurt am Main: Georg I Rab, Sigmund Feyerabend, 1579). Image courtesy of The Getty Research Institute via Archive.org