This year our project has delved deep into experimental work, and we have spent a lot of time thinking about different traditional techniques, scientific experiments, and methodology. Sophie Pitman and I were very excited to take part of the Dressing the Early Modern Network’s conference Dress under the Microscope: Contributions of Science and Technology to the Study of Early Modern Dress in Lisbon on 12–13 September 2019. The conference was organised in the National Museum of Theatre and Dance. The aim of the conference was to generate a discussion on how science and technology complement other approaches in the interdisciplinary field of early modern dress.

The conference programme offered a varied and nuanced look into this subject. Some of the presentations concentrated on specific scientific methods and their use, such as Jenni A. Suomela’s paper on plant fibre identification and Ana Filipa Serrano’s on various non-invasive techniques for textile studies, while others discussed the methodology in a broader sense, such as Jane Malcolm-Davies’ paper on dating knitted objects and Annelena de Groot’s paper on reconstructions. We also heard several interesting case studies on how these methods have benefitted research. Another very interesting topic was the use of databases and digital data analysis. 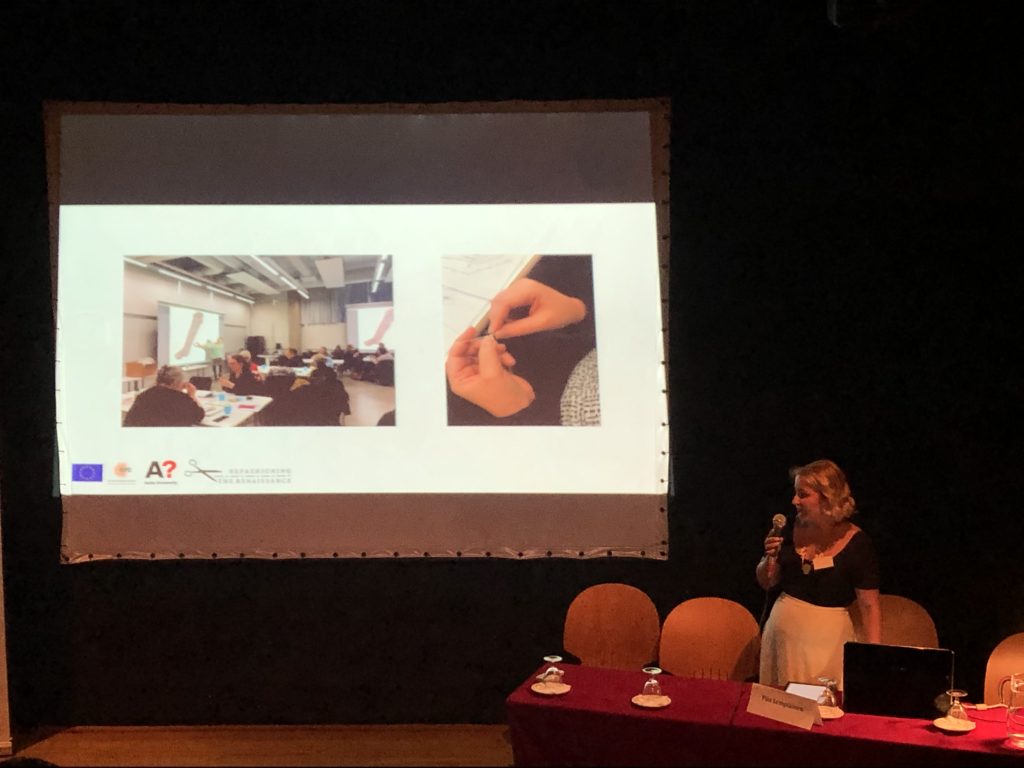 Piia Lempiäinen presenting at the Dress Under the Microscope Conference. Photo: Refashioning the Renaissance.

Sophie and I both presented a paper at the conference. My presentation Stitching History Together: Using Scientific Methods and Citizen Science to Understand Early Modern Stockings, was built around our citizen science project, which I have been steering since the start of this year. Scientific analysis is a central part of the reconstruction of the 17th century stocking in the Turku Cathedral, and my paper discussed what kind of tools and methods this type of research can provide for cultural analysis of historical dress. Sophie’s paper From Microscope to Archive and Back Again: How Microscopes, Social Media, and Collaboration Can Lead to New Findings in Dress History presented a case study of a re-dating of an object based on multidisciplinary methods and close reading, and it will be published in the future. 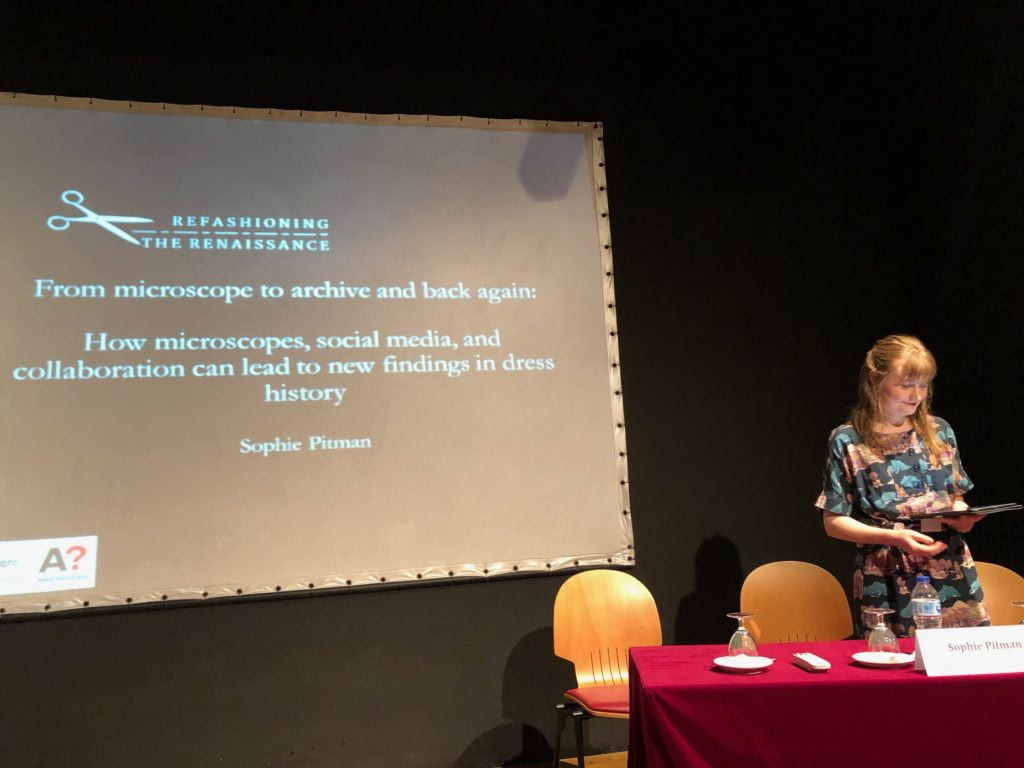 Sophie Pitman presenting at the Dress Under the Microscope Conference. Photo: Refashioning the Renaissance.

In addition of interesting papers, conference programme also included a visit to the beautiful Museum of Costume. We thoroughly enjoyed this fantastic conference and look forward to the next one! 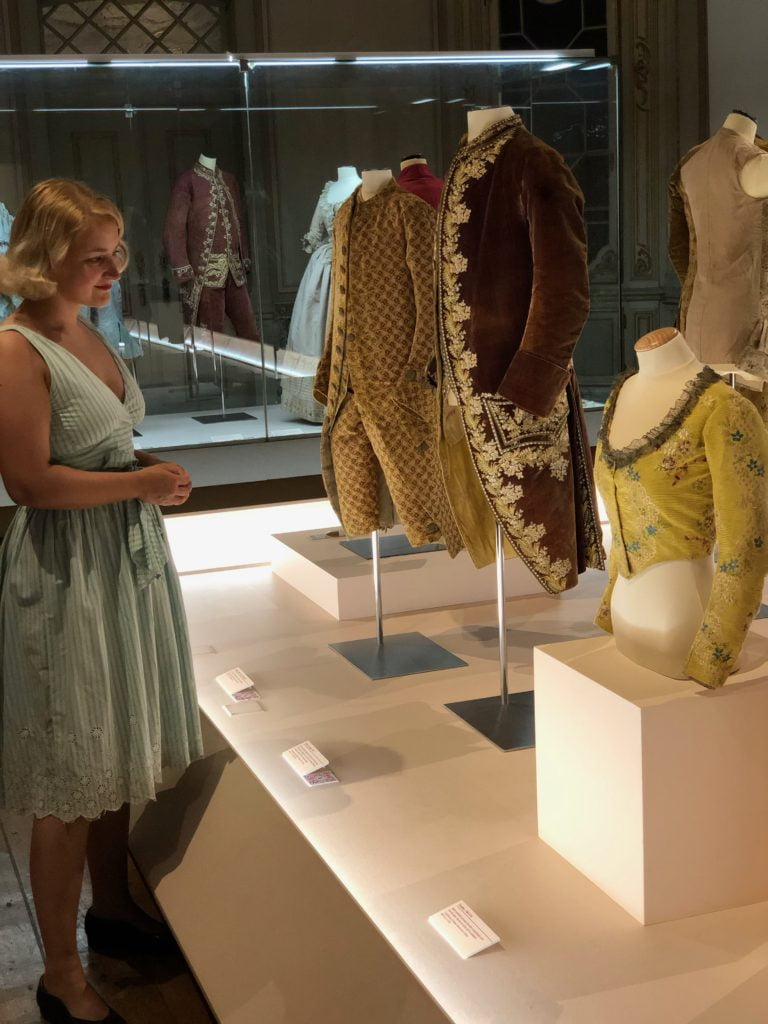 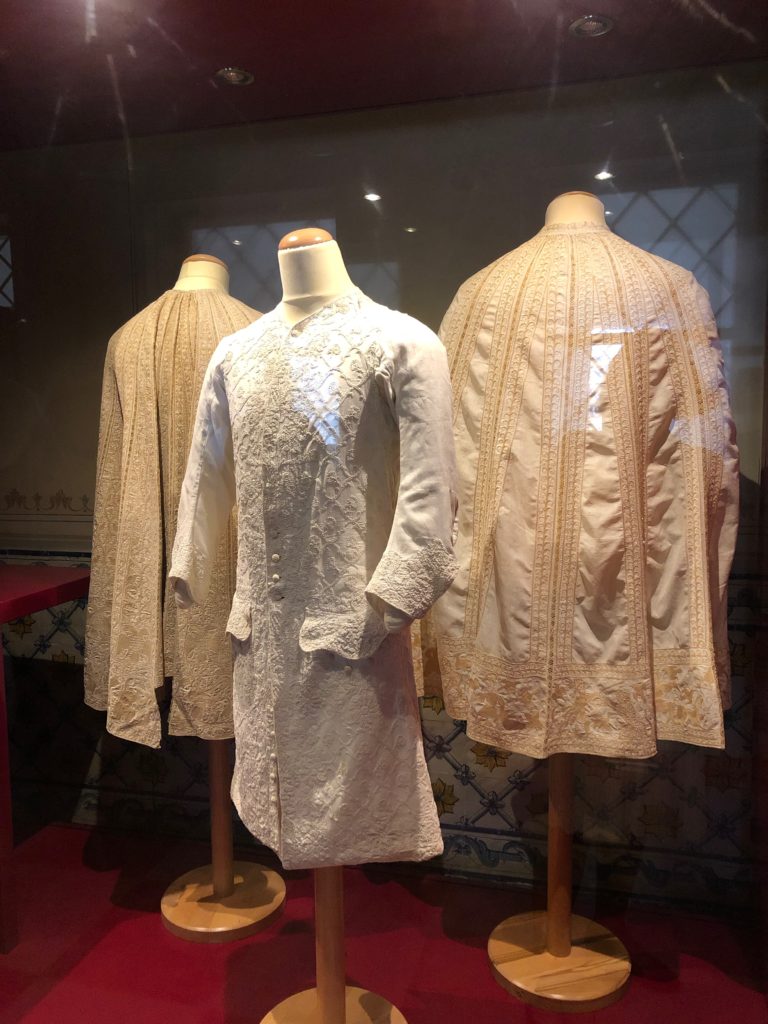 17th century clothing at the Museum of Costume. Photo: Refashioning the Renaissance.

In the tailor’s workshop: an exhibition

Refashioning the Renaissance project is based in Aalto University, housing the schools for science and technology, business, and art, design and architecture. This multidisciplinary environment enables our project to engage with different areas of research and find new perspectives for our research, but it also means that most of the people in Aalto are not familiar with historical research. 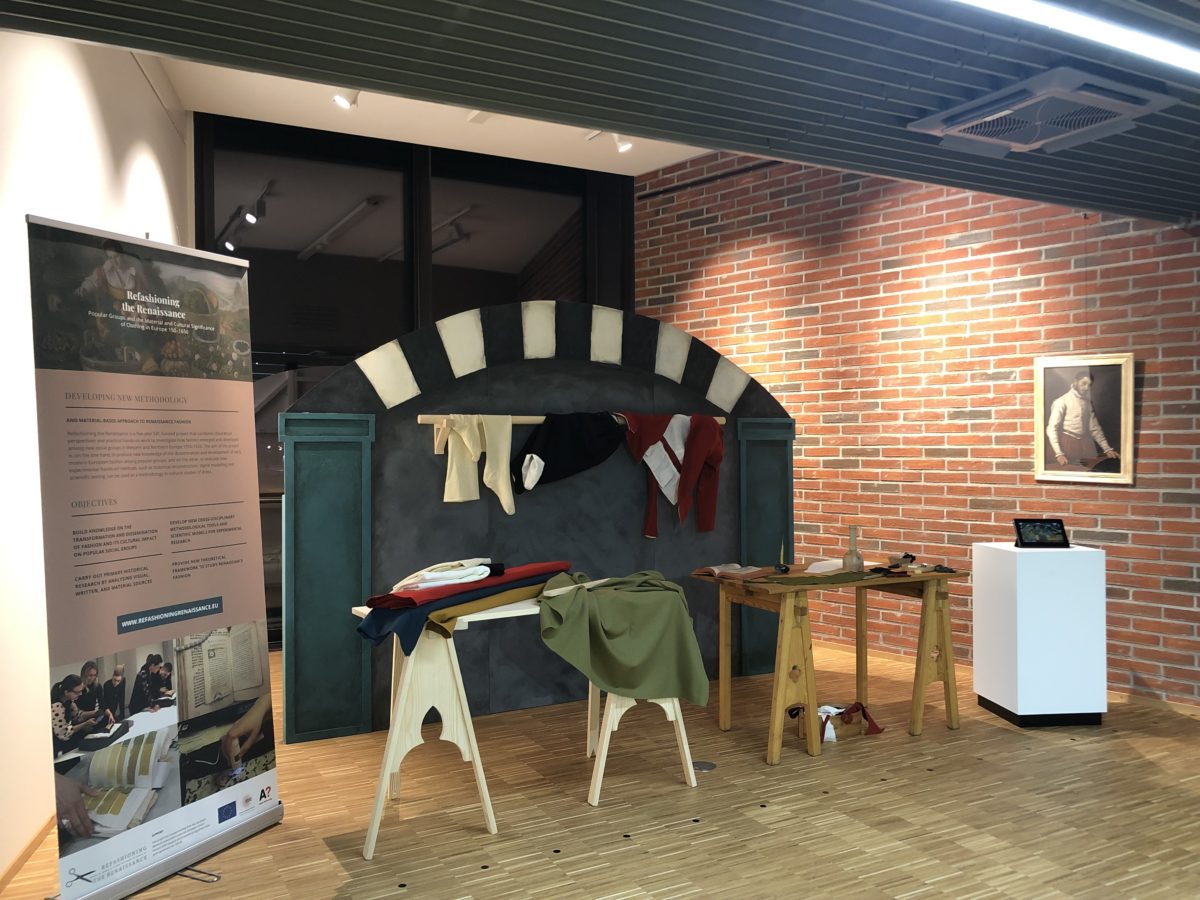 Exhibition at the Väre FE lobby.

We came up with the idea of an exhibition, as a way to showcase our project to our colleagues and Aalto students, who necessarily do not know about our time period or about the research we do in the project, and also to kick off the experimental hands-on phase of our project. As reconstructions and hands-on experiments are important research methods for us, we wanted ‘making’ to be in the heart of the exhibition. Sixteenth-century tailors and their craft seemed like a natural choice, especially since it opened up a dialogue with contemporary fashion studies taught in Aalto.

The “Tailor’s workshop” exhibition on 7 January–8 February in Väre FE lobby recreated a sixteenth-century tailor’s workshop, modelled after early modern images, such as a fresco of drapers in Castello di Issogne, Italy. Different tools and materials used by early modern tailors were laid on the two tables, and finished garments are hanging on a rack. Many of the early modern tailor’s tools are same as the ones still used today—like scissors, thread, needles, and thimbles—whereas others are specific to the time period and not used anymore, like pinking tools that were used to cut fashionable slashes in fabric. 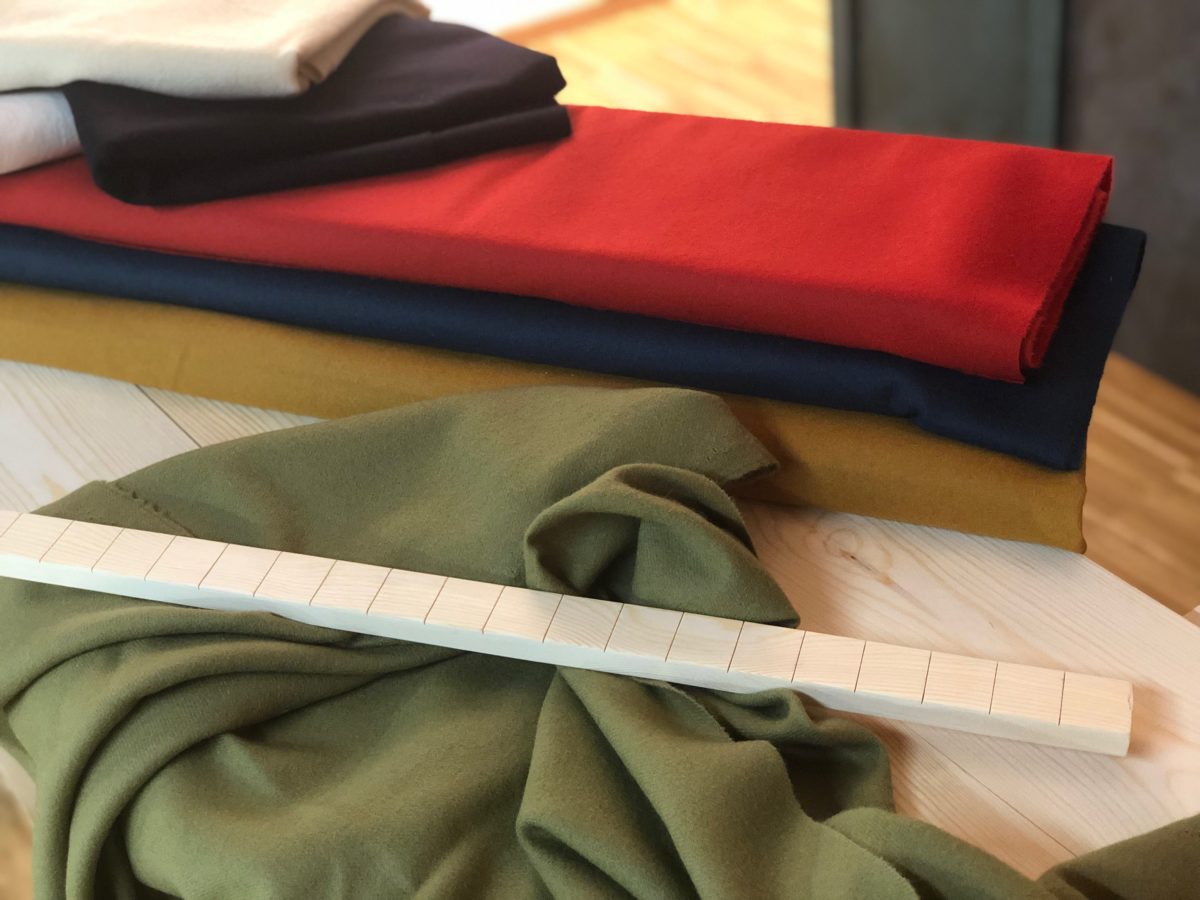 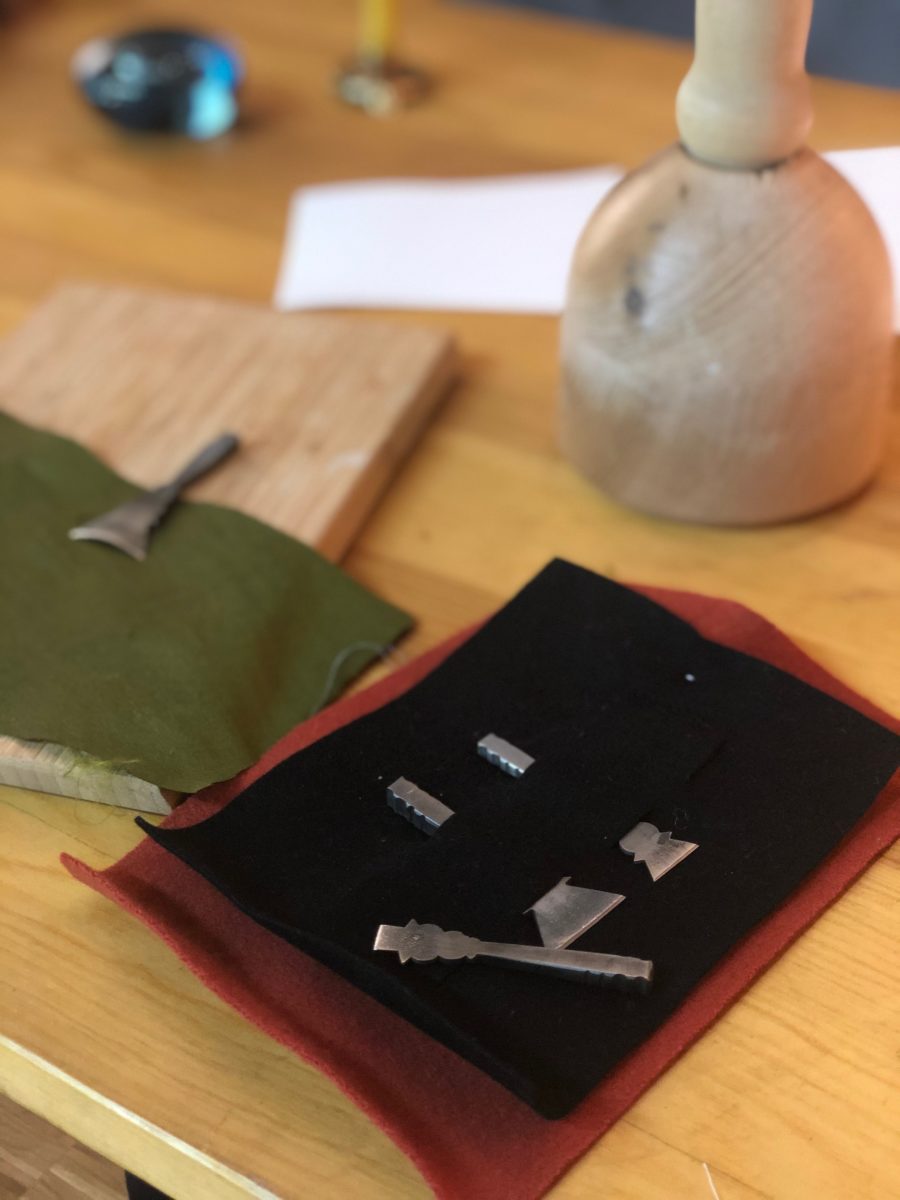 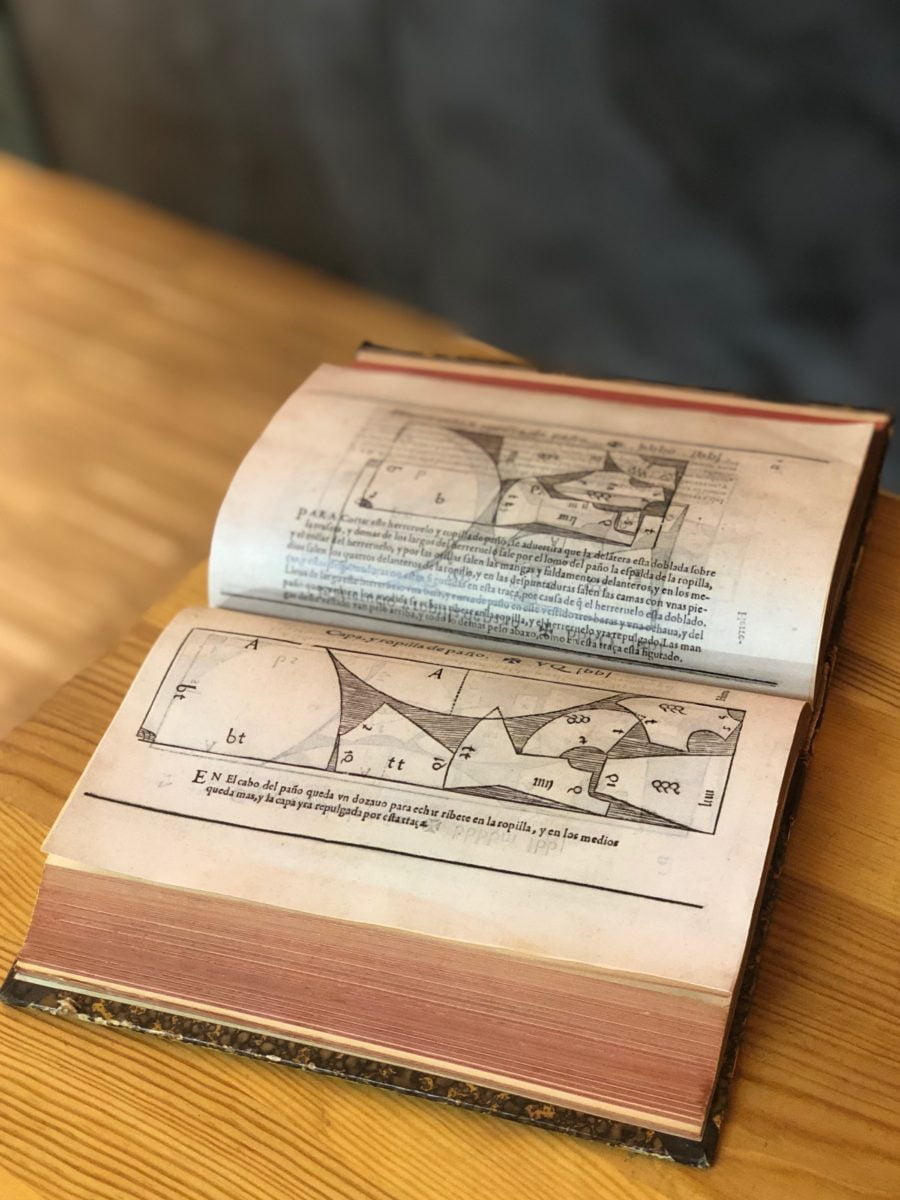 Recreating this workshop helped us to communicate a vital material aspect of our research; how does it feel to us these tools, such a sew with a bronze or iron needle instead of industrially made high carbon steel needle. It also helped us to discuss how historical and modern techniques differ and correlate. For example, laser cutting fabric can be seen as a modern take of the renaissance technique of slashing fabric.

As a ‘stage’ for our project, the exhibition allowed us to talk about our project and activities, and disseminate information about 16th-century fashion, clothing and tailoring practices. As part of the exhibition, we also organised a lunch talk event, where we invited people to talk about early modern fashion and tailoring practices with our researchers. Some came to visit Aalto specifically to take part of this event, and it was wonderful to see how many people were interested in our project, and how these centuries-old tools and techniques combined with modern research methods resonated with them. 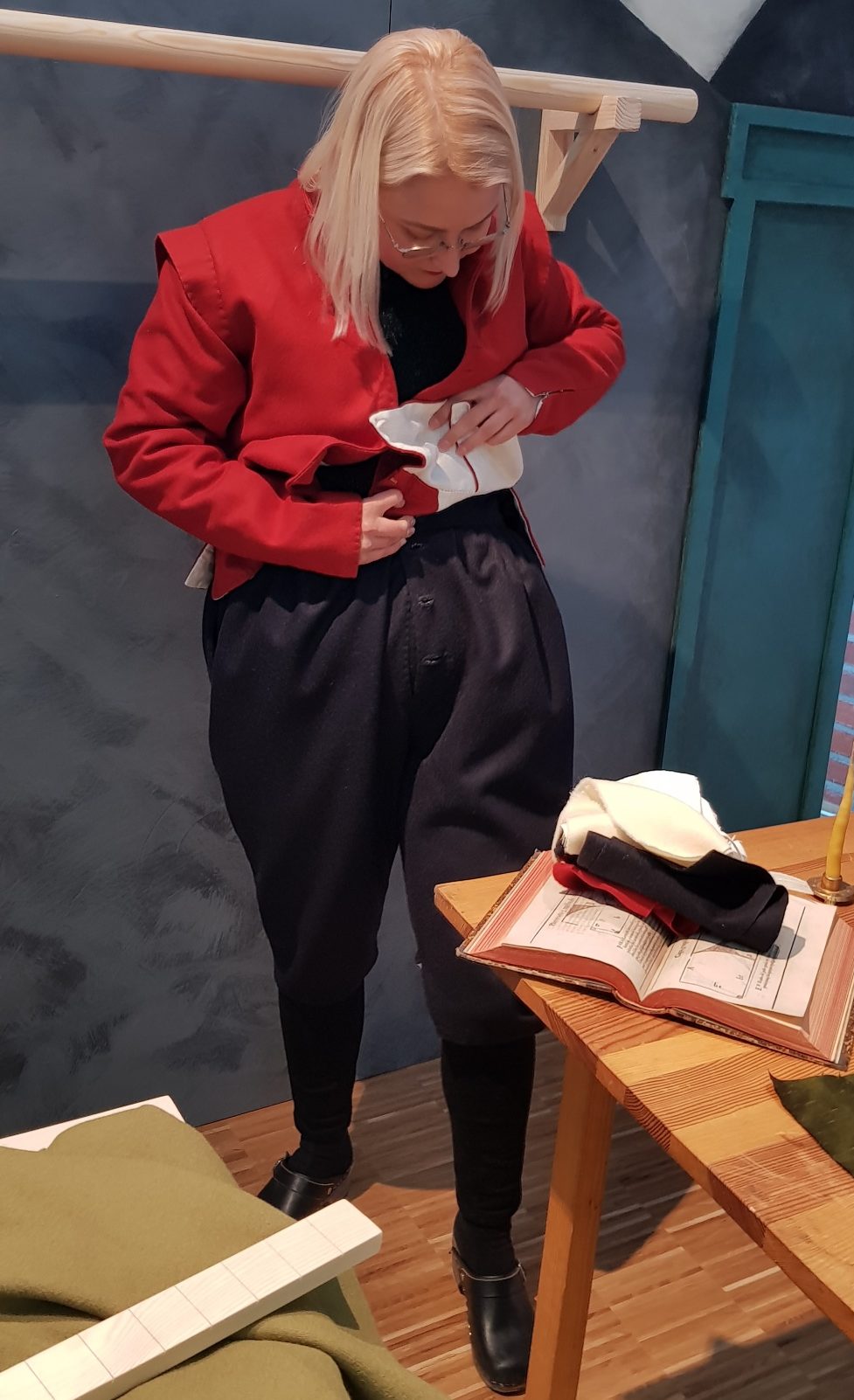 Piia Lempiäinen demonstrating how a 16th century doublet was attached to breeches. 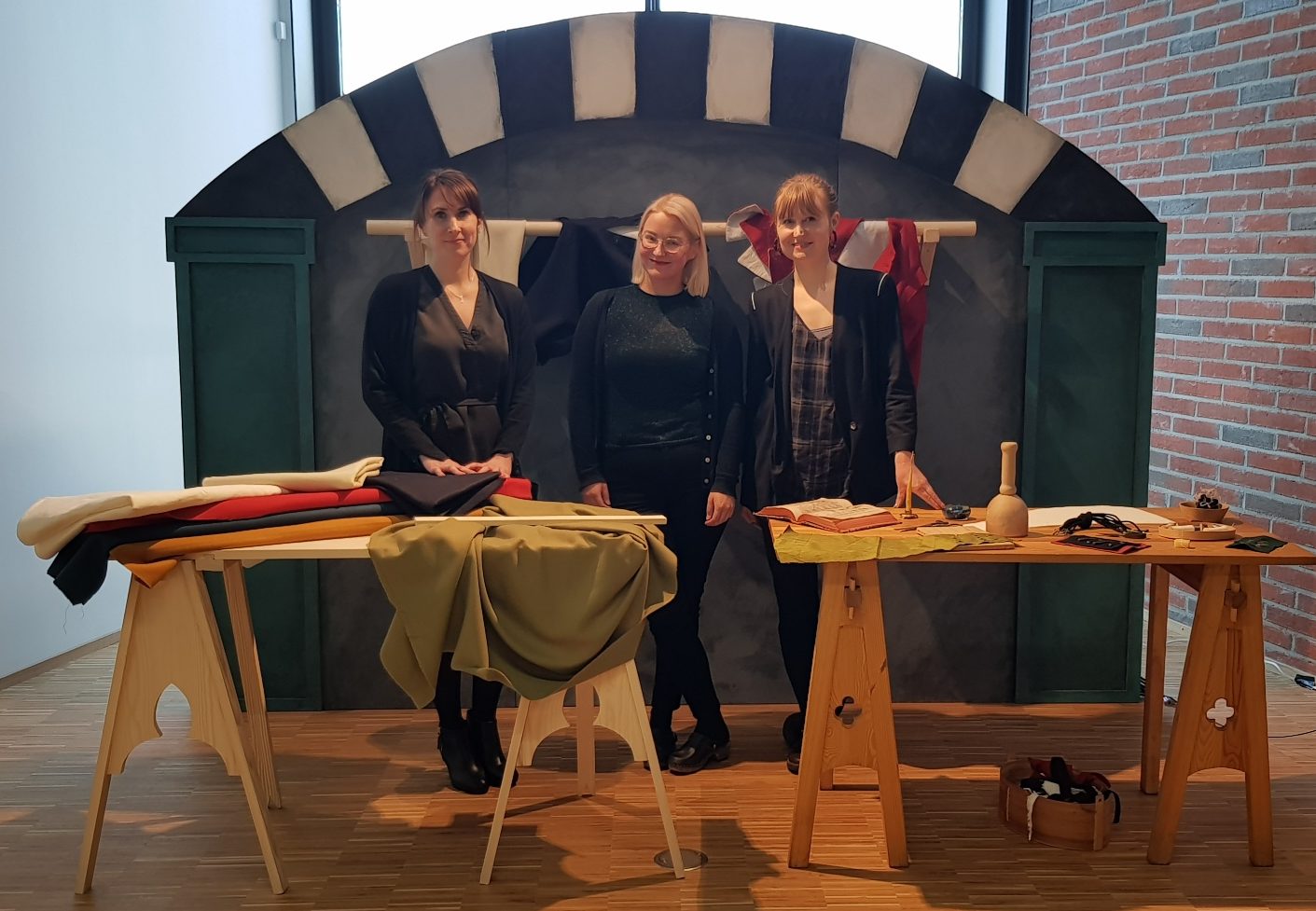 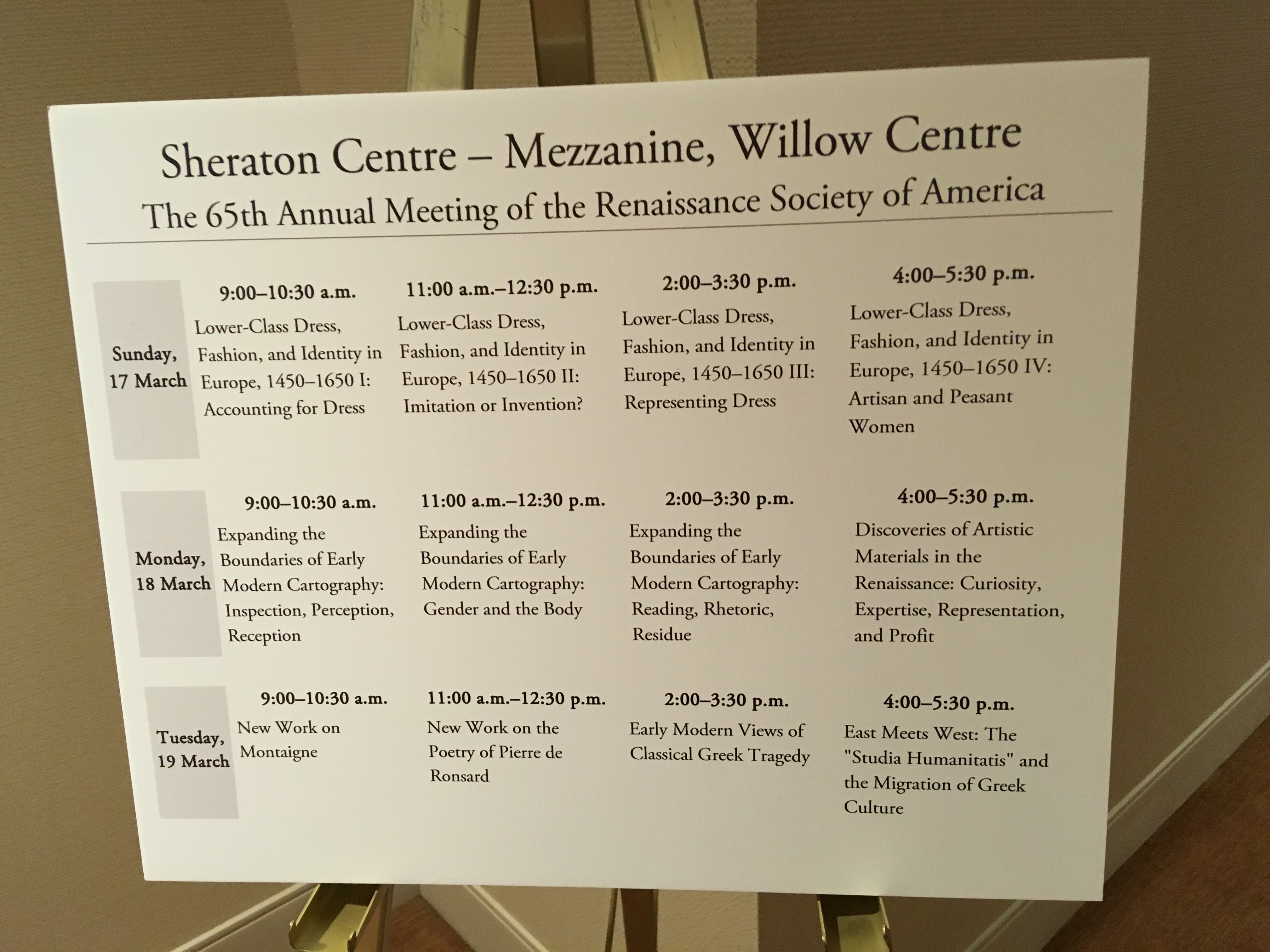 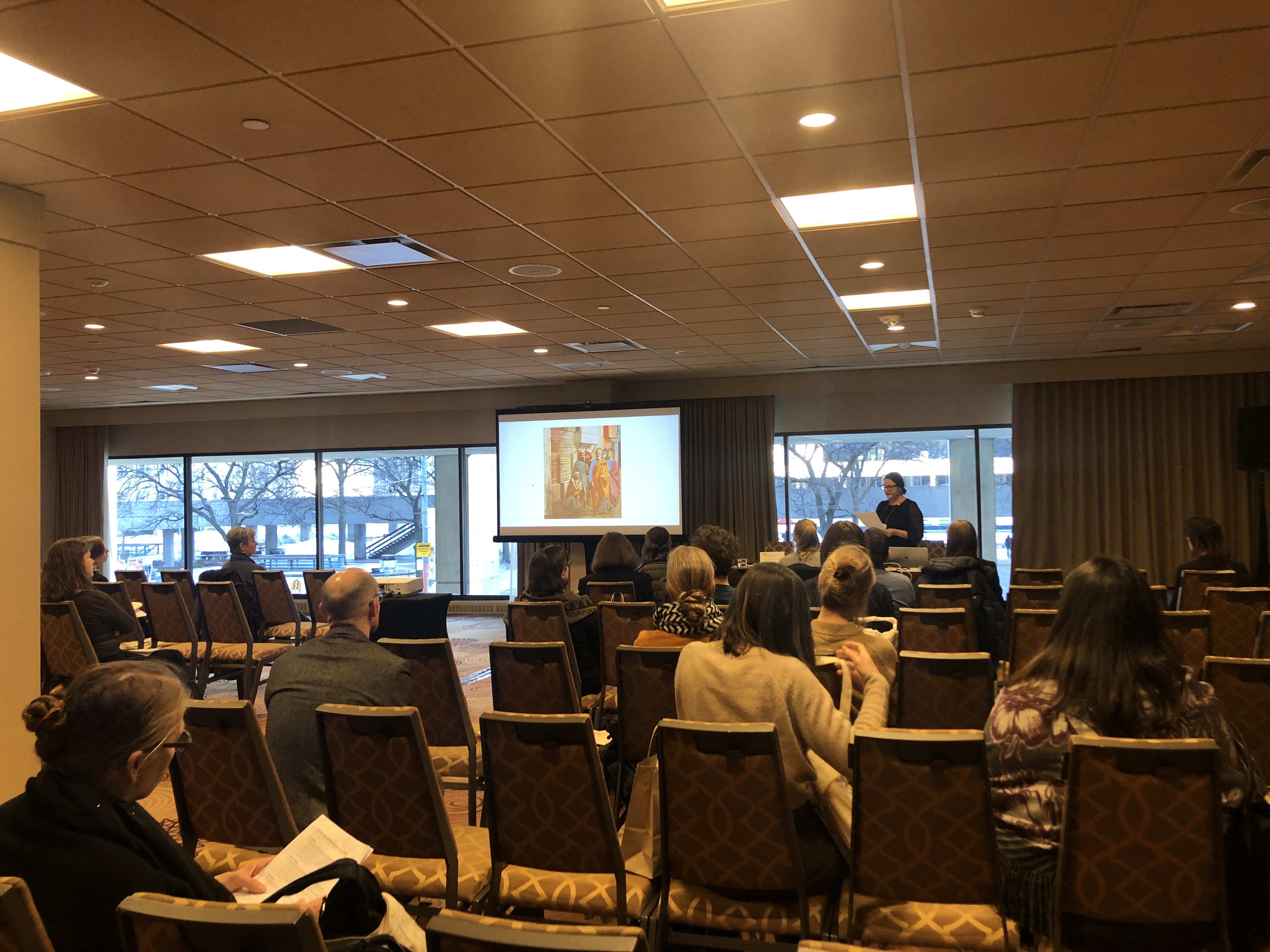 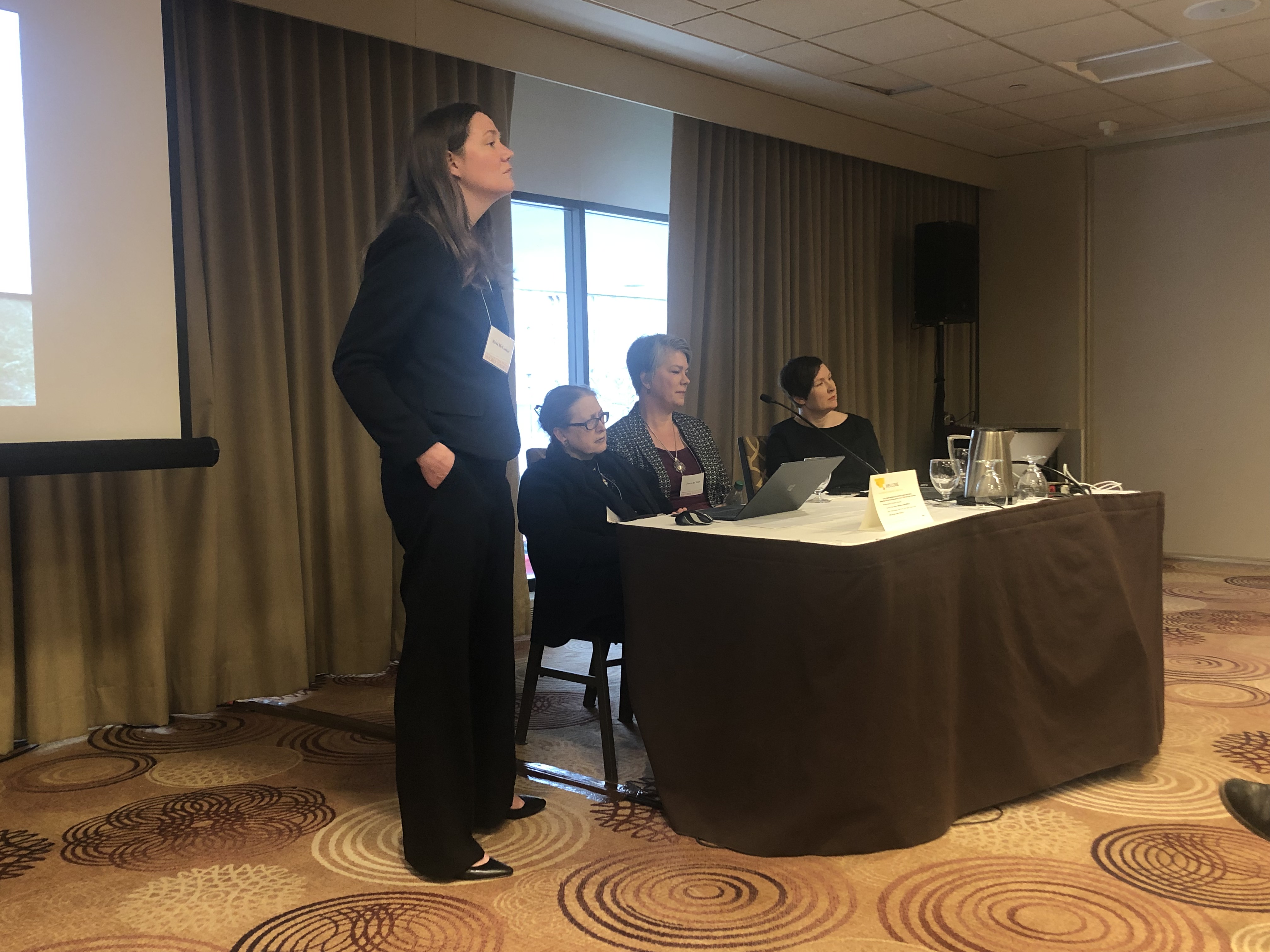 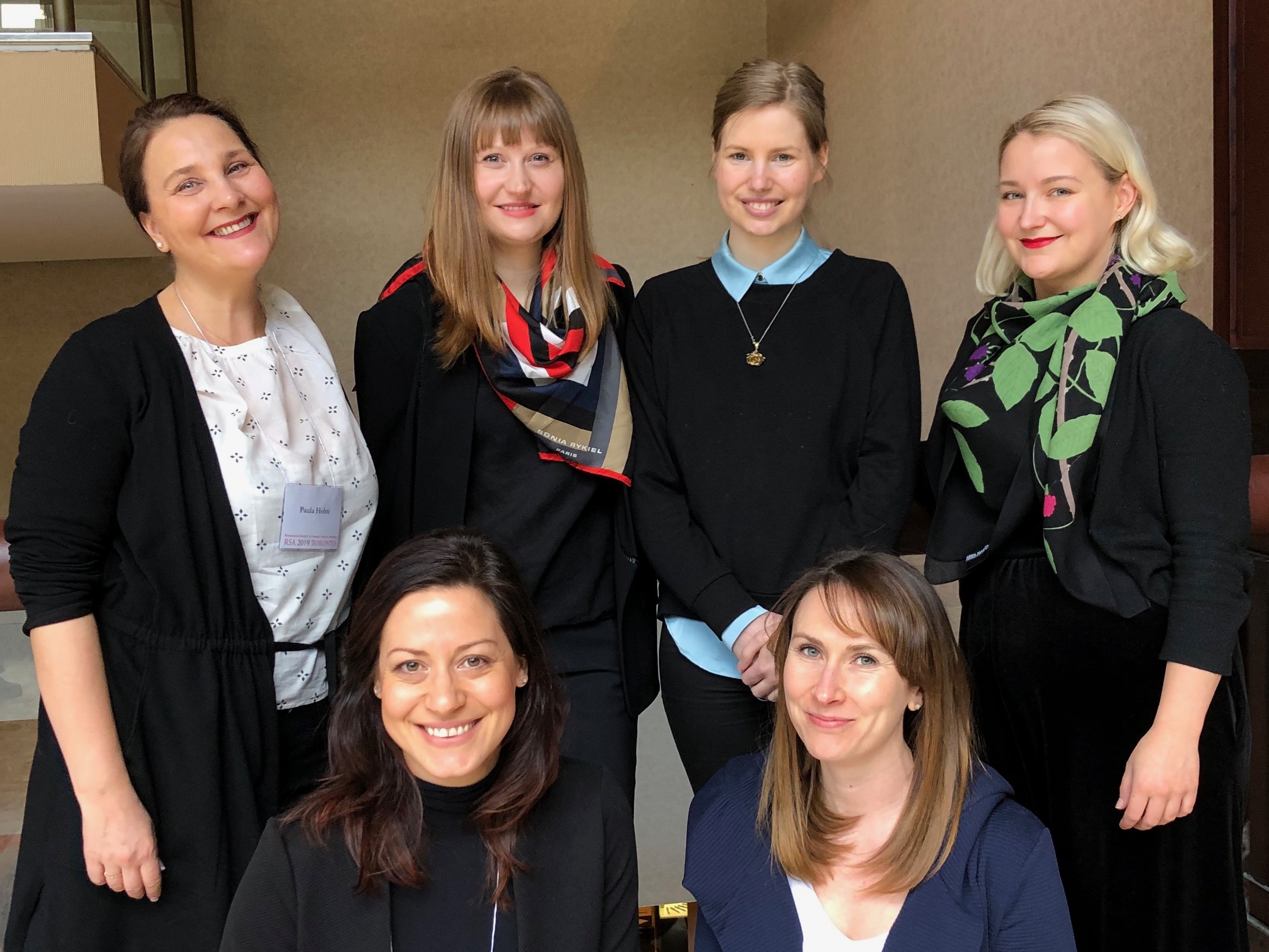