One year of PhD research

Since I started my PhD studies one year ago, I have mainly been focusing on collecting relevant sources on artisan dress in Renaissance Denmark in 1550–1650.

The sources I have gathered range from travel accounts, sumptuary laws to religious and moral writings about dress, printed sources, and images that shows the dress of ordinary people and artisans. However, most of my time during the first year has been spend in the Danish National Archive, collecting inventories of artisans from the town of Elsinore. Going through 15 handwritten protocols and one published, I have collected over 400 artisan inventories that contains lists of dress.Furthermore, these represents artisan masters, journeymen, artisan wives and widowers and their children.

In general, the records give information on the types and styles of dress, colours, accessories and sometimes the condition of clothing.  Some of the inventories also give examples on people from the artisanal group who kept fabrics for having clothes made. In 1592, when the Blacksmith Peder’s estate was drawn up, the valuers found wool worth of 1 mk, which was supposed to be made into a kirtle. Furthermore, his estate contained a red woman’s skirt made out of say, an old leather kirtle with five pairs of silver hooks together with a leather jacket.[1] 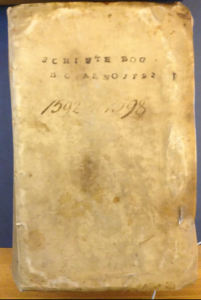 The inventory from Peder Blacksmith from 1592 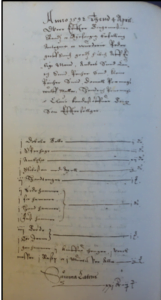 I have also found evidence on how dress items were circulated within the family, when they were for example given as heirlooms. In 1644, when Hans Petersen Brewer´s wife had passed away, his daughter, who at that point was only one-and-a-half-year-old, inherited a pearl ribbon, with small pearls from her mother. [2]

These few examples are only a fraction of the information that the inventories reveal.From January onwards I will be focusing on structuring the information from sources, and this will hopefully uncover lots of exiting things about the clothing culture among artisans in in Early Modern Denmark.