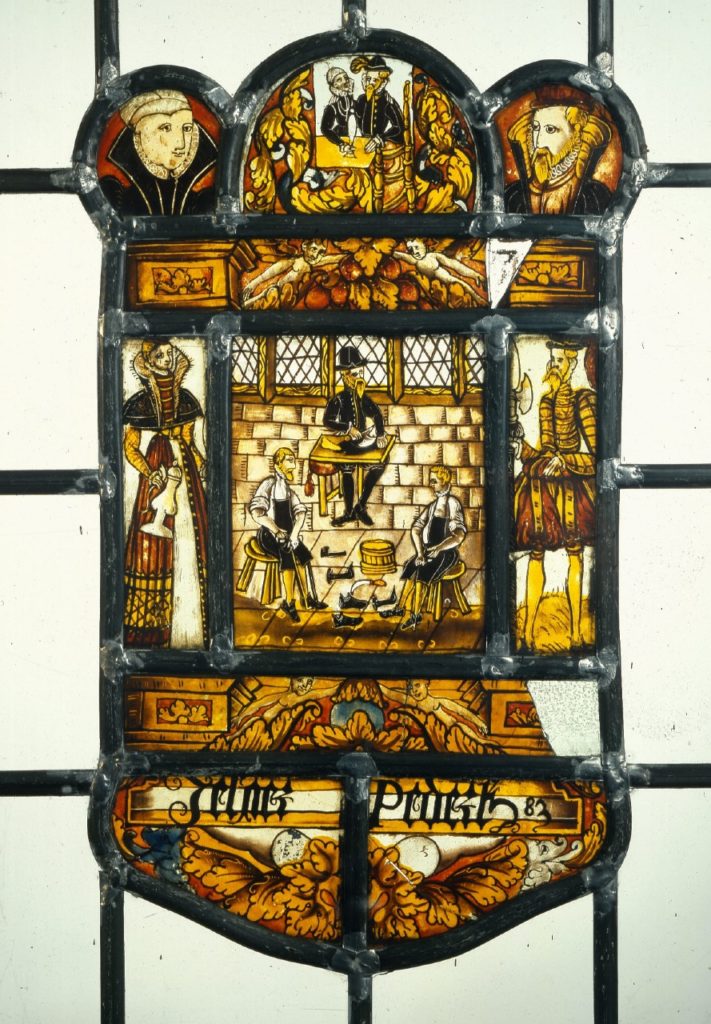 In the process of gathering source material for my PhD research I came across a beautiful and decorative glass window in the shoe makers guild house in Odense, dating from 1583. Jens Pedersen had commissioned and donated the stained-glass window, picturing himself with his wife and two other shoemakers, probably a journeyman and an apprentice.

I was immediately caught by the details in the illustrations, and how the stained glass gives insight into the workshop of a shoemaker. Then I became intrigued by the variety of fashions and styles of garments that Jens Pedersen and his wife are wearing. They are each portrayed with three different outfits, showing off many kinds of decorative and colourful fashions and styles. The glass window shows different styles of hats and caps, and the construction of the clothes is also quite clear.

A work scene from Jens Pedersen’s workshop is depicted in the middle of the frame. He as the master artisan, is sitting at a table wearing a black doublet and hose with some kind of linings, together with black stockings. On his head, he is wearing a black hat. The two working men are wearing white, probably linen shirts, black hoses and yellow stockings. They are all wearing ruffs around their necks. The workshop scene shows how the master artisan is cutting leather, and the journeyman and apprentice are sewing leather shoes together. The depiction not only gives insight into the working environment of the artisans, but also reveals a social hierarchy through the clothes worn by the master artisan and his workers. Were these the actual clothes shoemakers wore, when they were working in the workshop? And does this paint a realistic picture of an early modern artisan workshop?

Jens Pedersen must have had an agenda and an interest in showing himself off in the best possible way, and he is clearly aware that fashion can be a tool for promoting his own role as a prominent master shoemaker and burgher in the city of Odense. Especially the depictions outside the workshop signal honour and respect, and he is clearly using fashion as a tool for making himself stand out, and to shape his identity as a prominent and important burgher. His way of establishing himself as an important burgher can also be seen in the way he is using symbols, his wife with a wine jug and himself with a spear symbolling his participation in the city defence work.

His donation to the guild house shows that he proudly associates himself with the tradition of shoe making and of the guild. But at the same time, he distances himself from the coarser work of making shoes through his dress. Perhaps he also thought that the public placing of the window in the guild house could help shape an understanding of shoemakers as being fashionable, and in this way getting more patronage and additional commissions. No matter what, this is an excellent example of artisan self-fashioning, and I look forward seeing if there are similar examples out there.

Andersen, Vivi Lena: Between Cobbles, Bunion, Shoelast and Fashion. Shoes from 1300-1800 from Archaeological Excavations in Copenhagen, phd-dissertation submitted for University of Copenhagen, 2016.