On a fall day the 15 October 1591, the worldly possessions of the deceased couple, the Elsinore glazier Morten and his wife Kirstine, were divided among their two kids, the son Morten Mortensen, and the daughter Anne Mortensen.[1] Unfortunately the inventory is not clear about whether the father or mother died first, only that their children were entitled to their common goods. [2] As a glazier, Morten worked on windows, and owned for example a casket with candles, a tool for rolling lead mullions for windows, and a chest and another box with glass ‘whole and half panes’.[3] 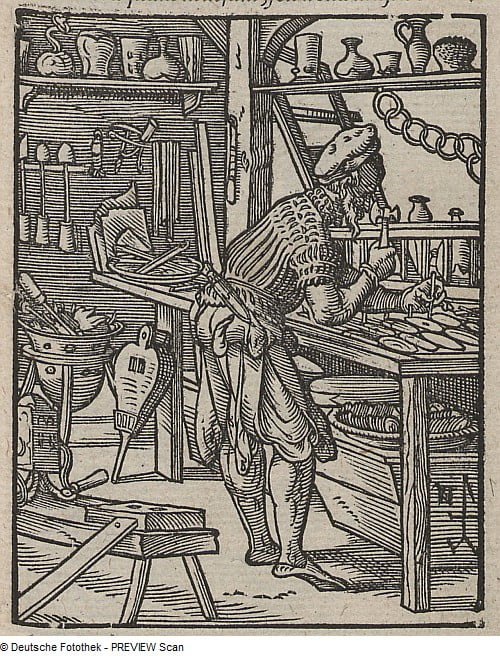 Sadly, their son Morten died not long after his parents’ inventory was made, leaving Anne alone at a presumably very young age.[4] We do not know what happened to Anne from the time of her parents’ death to the death of her brother, but we can see from her brother’s inventory that several costs for Anne were listed, indicating that she was taken into care from 12 October 1591 until Christmas, but by whom, and what happened after this, is unknown. Entries also indicate that she had new clothing made: the tailor was paid 2 marks and 4 shillings for two garments and  some mackaye, possibly a mixed woollen fabric that could contain linen, cotton or even silk.[5]

Despite these awful circumstances two rather interesting inventories survive from this family, documenting what happened to the clothing belonging to the parents, not only in terms of why and how it changed hands, but also how the descriptions of the garments changed.[6] 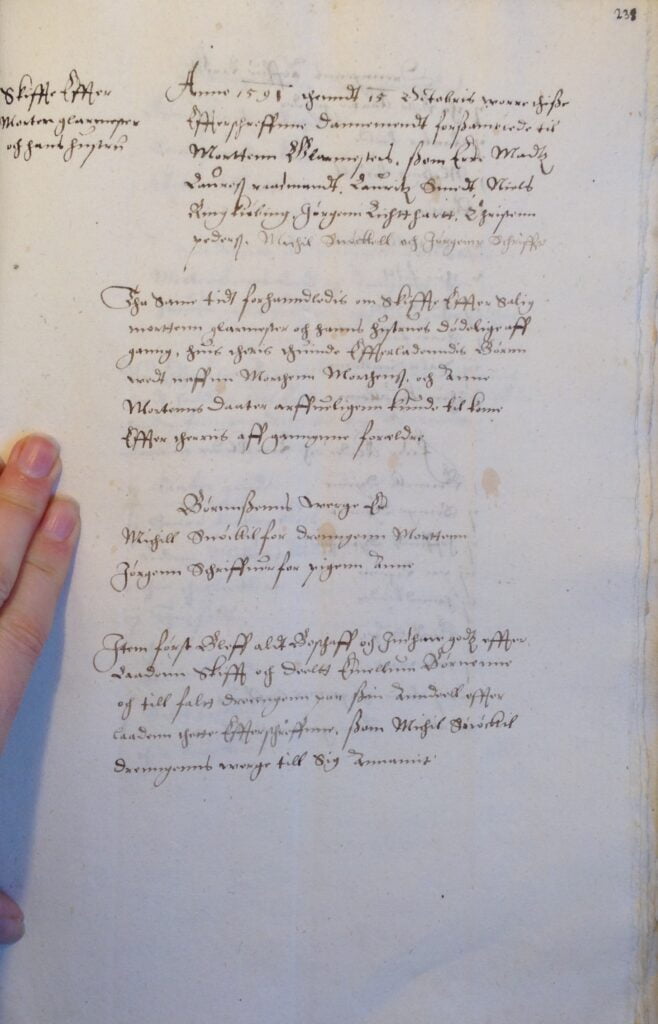 First page of the common inventory of the parents Morten Glazier and his wife Kirstine.

The clothing of the parents

The apparel of the parents was first distributed to the two children. The heirs for the glazier Morten and his wife were Morten and Anne, represented by their guardians Michell Snøckill and Jørgen Shriffuer, who were responsible for naming the goods. Both children’s lots included numerous items of copper, brass, and pewter, as well as a number of household linens such as sheets, bed linens, and table cloths. The children also inherited all the household’s linen fabrics, adding up to 48 ells (ca. 30 meter) of linen fabric made of flax and 26 ells (ca. 16,3 meter) made from coarser blår (tow). It seems that it was mainly the mother’s clothing that was given to the children; the items Morten received included one woman’s brown kirtle, a black woman’s kirtle and a red skirt. In comparison Anne received a cloak with a velvet trim and a red woman’s kirtle.

Some of Morten and Kirstine’s clothes were also sold, which could be a way of obtaining financial means to benefit the children or to pay for the funeral or the cost for having the inventory made. Father’s outfit, a black kirtle made out of English cloth and a pair of breeches, was bought by a man whose name was Jørgen Lichtt Hartt for 3 daller. He also bought a felted hat for 24 shilling, but since the estate of the glazier and his wife owed him 11 shillings he ended up paying only 13 shillings. But some of the clothing owned by the glazier and his wife was also used to pay people who had provided services to the couple. This included their servant-maids, who were given two of Kirstine’s trøjer (doublets), and a pair of stockings were given to a woman who had watched over ‘the corpse’.[7] Some of the father Morten’s clothes were also bequeathed to close family, for no costs it seems. This was the case with a pair of leather stockings, 2 leather livstøcker (a sleeveless garment worn over the shirt), and a pair of leather breeches which were granted to the children’s grandfather on their mother’s side. Additionally, a cloak, presumably also belonging to the father, was used to make new garments for his children.

When the young Morten died in March 1592 an inventory of his goods was made.[8] This inventory explains how Morten’s guardian sent for his sister’s guardian to collect the goods that he had received from the estate of their parents. Is not clear if Anne received all her brother’s goods, but the objects listed in the inventory drawn up after her parents are listed again, giving us new insights about their appearances and where some of them went after her brother’s death.

Emphasized in brackets were Mortens heirlooms that were inherited from his mother, but now their descriptions had changed slightly, including:  ‘1 black under kirtle, 1 red flesh coloured skirt and ‘1 brown under kirtle without upperpart’.[9]

The inherited clothing highlighted in brackets in the son Morten’s inventory.

Anne’s goods had also changed description: the black cloak was still decorated with velvet trim but instead of just being a kirtle, the red garment was now described as an under kirtle. These changing descriptions in the inventories indicate not only the difficulties of working with dress terminology but also how perceptions of clothing change from viewer to viewer, giving new information on shades of colours and the construction of garments.

Sale of the mother’s kirtles

It is not clear what happened to the red or flesh-coloured skirt belonging to Morten, but we see that two kirtles, presumably the ones he had inherited, had been attacked by moths. They were therefore not useful, and were given to a woman who in turn sold them for 24 shillings. This is an interesting information because it tells us that garments—even in bad condition—could be attractive on the secondhand market.

By investigating two inventories from the same family we are able to follow the many ways in which clothing could be obtained and disseminated into society as heirlooms, sales, gifts, or a way of paying for services. Hopefully further research will reveal more of these interesting cases.

[2] There is unfortunately no information on the time of death, where they lived in town, or the age of the children.

[3] His tools and materials were left undivided and given to his children.

[4] The inventory of her parents belongings was made up on 15 October 1591 and the inventory between the son Morten and his sister Anne is dated 10 March 1592.

[6] On this topic see e.g. Patricia Allerston, ‘Clothing and Early Modern Venetian Society’, Continuity and Change 15, no. 3 (2000): 367–90, who discusses many of the ways clothes could be obtained and distributed in early modern society.

[7] If this was Morten Glazier or his wife is not mentioned.

[9] The inventory of the son Morten in general includes more clothing than he inherited, so we must assume that these were his personal textiles including a linen skjortekrave (shirt collar).